This blog post describes a peak performance Brainspotting session by Dr. David Grand with a professional triathlete on July 17, 2016, during Phase 3 in Boulder, CO.

Sam Long, describes his experience, and we’ve added some technical comments to accompany his description. Sam was 20 years old at the time of the demo, had competed in his first full Ironman tr 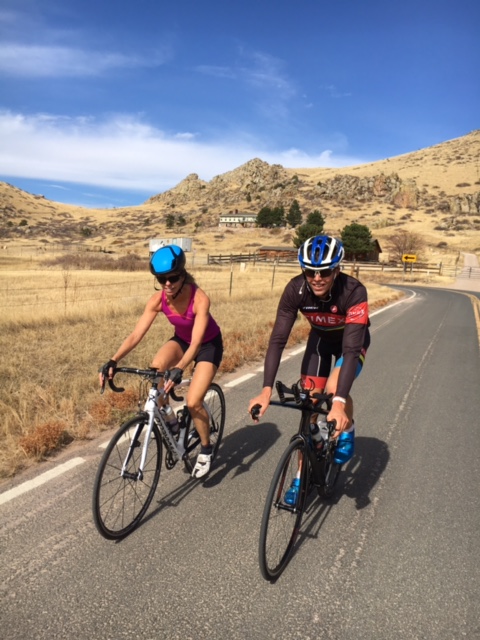 That qualified him to go to the World Championships i Kona, Hawaii, but he gave up his spot because he was starting college a few weeks before the race. He qualified again for Kona the following summer (2015) at age 19 and went to the Triathlon World Championships in October 2015. He was the youngest male there. Sam became a pro triathlete in May 2016. He is a full time student at the University of Colorado in Boulder. A full Ironman (140.6 miles) consists of a 2.1-mile open water swim, 112-mile bike, and a 26.4-mile run/marathon.

Sam Long (SL): The session started off in a large room with perhaps 75 people. David Grand asked some questions about my family and life. I told him that I was a triplet, consisting of three boys, and that I had an older sister. We further talked about my lifestyle as a kid which included participation in virtually every sport under the sun and how the three of us were always playing games. I told him that growing up in a loving and supportive family had really allowed me to believe in myself and have a great time.

Next, we turned to my goals. I usually do not tell people my goals, perhaps because I do not want to sound full of myself and then people expect it to happen Nevertheless, I told the group about my goals and how I planned to reach them. I was definitely a bit nervous to be sharing such deep details of my life with complete strangers! However, this was only the beginning. The heavy stuff had not even started yet. David asked me about any injuries, accidents, and bad experiences I’d had related to sports.

Bette Sheldon Long, Ph.D. (BSL): Dr. Grand showed the group the art of setting the frame for a complex peak performance session. He was tracking Sam and identified five issues to brainspot.

SL: David reviewed the five areas we would be covering: 1) a traumatic knee injury from a ski accident several years ago; 2) disappointment about the World Championship race in Kona, Hawaii; 3) a coach challenging my integrity, 4) an ankle sprain that had occurred the day before this brainspotting session (at Xterra Beaver Creek where I placed second), and 5) lack of confidence/strength in the swim.  At first, I was skeptical of covering all of these points, especially the first one which had occurred 2.5 years ago. I thought I was completely over this and didn’t see any reason to have to revisit the experience. I couldn’t have been more wrong. The power of Brainspotting would come out in the deep pain I would relive and then overcome.

David had me put on the headphones with bilateral music going, and used the pointer to help me find a specific brainspot for the first issue. Once I fou 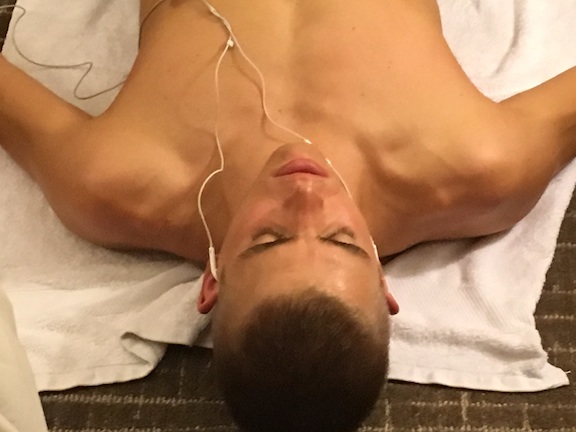 nd this point, which sounds crazy, my whole body felt connected and I found a deeper part of myself than is usually possible. We then relived the experience.

Essentially, the first spot involved a serious knee injury that happened when I jumped off a cliff while skiing solo at Crested Butte. When I landed, my bindings malfunctioned and one ski randomly popped off. I twisted my leg and tore my MCL. I felt deep pain immediately and fell. Soon, I realized that I had no choice but to ski down as I was way on the far side of the mountain and had just started the run. I proceeded to ski down in excruciating pain and eventually made it to a lift. I still had one ski-lift and another ski run to go, in order to make it to the base. I told a patroller down at the lift that I thought I needed help, but the patroller told me just to try and make it to the bottom. That was bad advice! Anyways, I got on the lift with a group of three rambunctious snowboarders who paid no attention to me. I forced them to put the bar down and continued to be in ridiculous amounts of pain up the lift. In fact, I remember going in and out of consciousness due to the pain and the fact that weight was pulling on a tendon I had just torn. Thankfully, I made it to the top where I saw my brother who said hi. I was unable to say hi back and collapsed as soon as I got off the lift. After this, the patrollers came and got me and took me to the bottom of the mountain where I went to see a doctor.

Going through this with David was a rather painful experience. Throughout it, I became very emotional and cried for the first time in a few years. However, by the end of this brain spot, I could literally feel the pain leaving my body and a huge wave of relief washing over me. I didn’t realize how much I still was carrying this experience and that it was potentially limiting my performance.

We then moved on to the next spot in my visual field (with the pointer). This corresponded to my disappointment at the World Championships in Kona, the previous October (2015), when I received a drafting penalty on the bike. This devastated me! I explained how because of my slower swim time, I started off with many competitors and had a hard time maintaining a distance of 25 feet between bikes (the legal drafting distance). Thus, in order to avoid a penalty and not ride slower that I could, I consistently passed people for the first hour. Finally, I had to eat something and slowed down instead of passing. However, I was still going faster than the person in front of me and drifted too close to the person in front of me. At that exact moment a referee came up and gave me a penalty. I was mad because everyone was drifting, and I was actively trying not to! (I do acknowledge that it was still a fault of mine, but that it was virtually impossible not to drift at some point in this race).

I lost my cool for the rest of the bike leg and rode way too hard because I was not mentally tuned in. This led to a very slow and painful run. What was hard about this experience was not the penalty itself per se but the fact that it went against what I believe in in terms of triathlon and my morals. I always try to race fair. Thus, the feelings I experienced for the spot this time were very much experienced somatically in my heart.

We covered the next spot more quickly since there was not as much emotional release and involved a similar “area of pain” to what was just discussed. While I am not allowed to disclose the details of what occurred with this coach due to a legal agreement–it is sufficient to say it was ugly. Thus, the spot was the same as the “Kona spot” since it was challenging my integrity in the same way. While a lot of pain was involved with this, I went through the same thinking as the last spot and was able to move on from it. In both these spots, the process went like this: at first pain was felt in my heart but as I was able to think about these experiences and the way I live life in a virtuous way–my heart began to feel big and strong.

The ankle sprain spot was also quick. I had severely sprained my ankle the day before in a race, and David thought it was good to release this pain. Ankle sprains are a common thing for me so we found an area of strength and healing. I believe this sped up the recovery of my ankle. Good thing I did, because I had a race in only 1 week, and I ended up having my best race ever. I do not remember any other details of this spot.

The final spot was fascinating. It had to do with the fact that swimming was my weakest sport and much of what I thought was holding me back was a mentality that “I am not a swimmer.” I also felt that I was not able to push myself hard enough in the swim because of a mental block. We found a spot of strength, which happened to be down and to the right where I talked about my good swims and good races. This had such a powerful effect that I ended up standing and doing the swim motion with my arms. I was completely transfixed in the moment! A really cool experience!

All in all, I was appreciative of this opportunity to do a peak performance demo with David Grand. I believe it helped. I definitely recovered from the trauma involved with the ski accident, Kona, and the coach. I still struggle with swimming but am always making large gains in the sport. I went on later that year to have a huge personal best swim time in an Ironman and in all my other swim portions of the events. I believe I am swimmer now. I decided to “turn pro” in April 2016 even though I’m only 20 because there are many benefits. Pros get to start at the beginning of the race so I don’t have to worry about swimming with 1800 other age group athletes and having to pass so many athletes on the bike.

As a whole, the year of 2016 was one of great success. I started racing in the professional ranks in June and was ranked in the top 15 in my races before this brainspotting session in July. After this, the season took a dramatic turn for the better with a second place finish at 70.3 Calgary, a 6th place finish in Xterra nationals in Ogden, Utah, another 6th place finish at 70.3 Austin, and a 15th place at the highly competitive Ironman Arizona. My times in the half Ironman distance improved from a 4:17 down to a 3:50. In this personal best of 27 minutes, I shaved 6 minutes off the swim, 10 minutes off the bike and 11 minutes off the run. In an Ironman, I had a 55 minute PR with a 10 minute improvement in the swim, 24 minute improvement on the bike and 20 minute improvement in the run. Some serious improvement for just one year! I will continue to race in 2017 and look for better things to come!

BSL: During the group process portion of the demo, David referred to Sam as a “high processor,” meaning that he was able to process through many issues with multiple brainspots at a deep level.

Bette Sheldon Long, Ph.D. is a clinical psychologist certified in Brainspotting who has been practicing in Boulder, CO since 1990. She is Sam’s mom.

The Rocky Mountain Brainspotting Institute (RMBI) is a nonprofit 501(c)(3) organization that was created to promote and advance the use of Brainspotting, an emerging new treatment in psychotherapy.